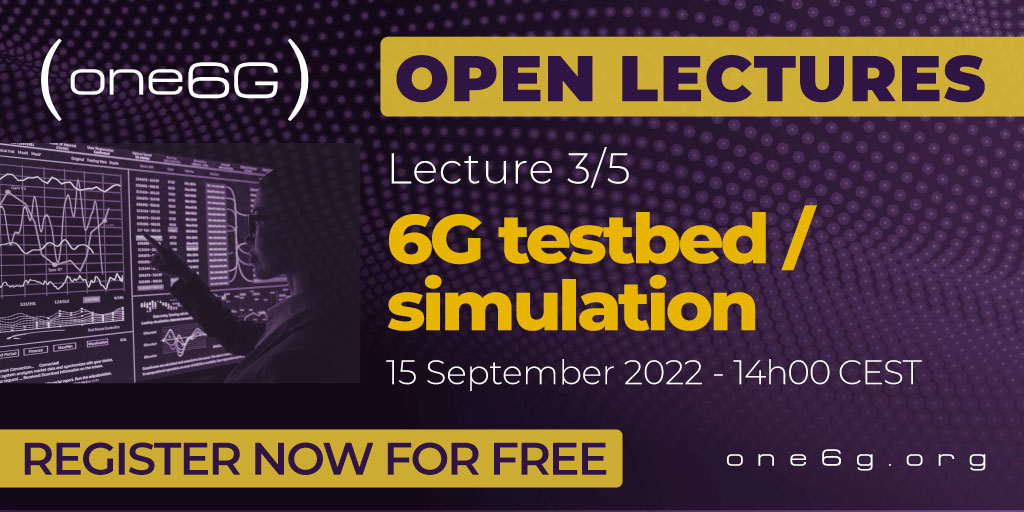 To share the progress and results of the work performed by the one6G Association with the extended one6G community, a series of open lectures has been launched. These interactive 2-hour online events are open to anyone interested in the world’s journey toward 6G.

Following the success of Open Lecture I and Open Lecture II, the Association is happy to confirm that the third Open Lecture in the series will take place on September 15, 2022, at 14h00 CEST, covering the subject of 6G testbed/simulation. The event will feature presentations delivered by four high-level speakers, followed by an interactive Q&A session. The lecture will be moderated by Monique Calisti, the CEO of Martel Innovate.

Attendance is free, but registration is mandatory. Please click the button below to fill in your registration form. 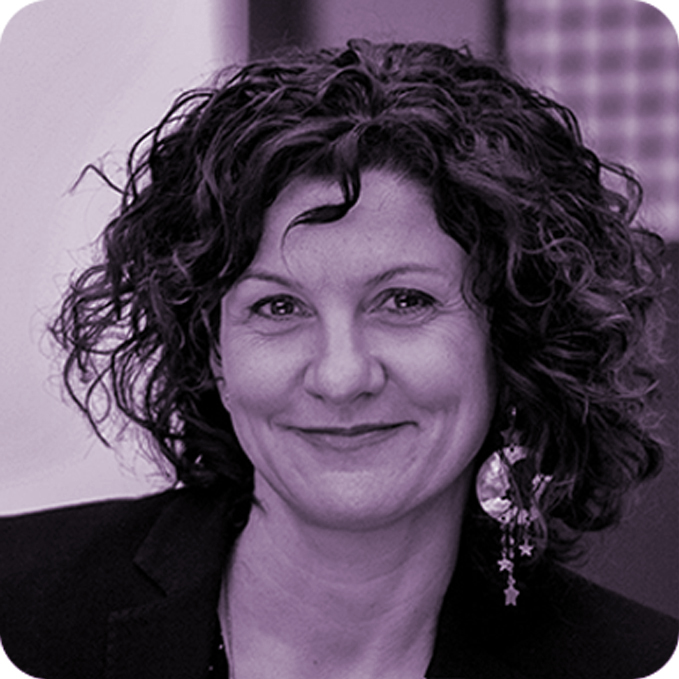 Monique Calisti is the CEO of Martel Innovate and the President of Digital for Planet. She is a passionate entrepreneur and an ICT expert with a digital soul and consolidated hands-on experience in research and innovation funding, strategic consulting, training, communication, social media marketing, as well as business development of sustainable and innovative software solutions across several industry segments. Specialized in European Commission funding, with extensive domain knowledge in Artificial Intelligence and Next Generation Internet technologies (IoT, 5G, Cloud/Edge, etc.), Monique assists Martel’s customers and partners with developing agile and efficient innovation strategies and plans. Having served the European Commission as an expert evaluator and reviewer for many years, Monique is currently a member of the Board of Directors of the European AI, Data and Robotics Association, the Director of the European Next Generation Internet Outreach Office, and a Coordinator of the European Next Generation Internet of Things Coordination and Support Action. In the last 20 years, Monique has been a speaker and moderator at several major scientific, technology, and policy events. She authored and edited many publications and R&D project proposals and served as program committee member of several international conferences. Monique holds a Ph.D. in Artificial Intelligence from the Swiss Federal Institute of Technology of Lausanne, Switzerland, and a Ph.D. in Telecommunications Engineering from the University of Bologna, Italy.
14:05   Testing waveforms, beamforming and applications for a next generation of mobile communications
In this talk we start by explaining the important role of realistic simulations, prototyping and measurements to design and analyse new physical layer techniques and their suitability to support emerging applications. Then, several examples based on recent work involving testbeds and measurements are detailed. The examples include the introduction of new multicarrier waveforms to improve the efficiency of machine-type communications, the provision of virtual reality services with millimetre-wave 5G links, and the design of adaptive techniques for arrays of liquid antennas. Some lessons learned are shared with the aim of encouraging the audience to pursue this kind of experimental activities. 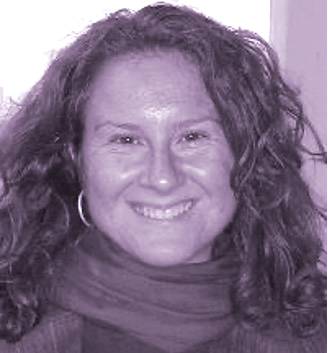 Ana García Armada is currently a Professor at Universidad Carlos III de Madrid, Spain, where she is leading the Communications Research Group. She has been a visiting scholar at Stanford University, Bell Labs and University of Southampton. Her research has resulted in more than 200 publications in international journals and conferences, as well as five patents. She is an Editor of IEEE Transactions on Communications, Area Editor of IEEE Open Journal of the Communications Society, Editor of the ITU Journal on Future and Evolving Technologies, and is a regular member of the technical program committees of the most relevant international conferences in his field. She has been part of the organizing committee of the IEEE Globecom 2019, 2021 (General Chair) and 2022, IEEE Vehicular Technology Conference Spring 2018, 2019 and Fall 2018, IEEE 5G Summit 2017, among others. She is the Vice-chair of the IEEE ComSoc Signal Processing and Computing for Communications Committee. She has been Secretary and Chair of the IEEE ComSoc Women in Communications Engineering Standing Committee. From January 2022 she is the Vice President of Member and Global Activities of IEEE ComSoc. She has held various management positions at Universidad Carlos III de Madrid, including: Deputy Director of the Telecommunications Engineering degree, Deputy Vice Chancellor for International Relations and Director of the Department of Signal Theory and Communications. She has received the Award of Excellence from the Social Council and the Award for Best Teaching Practices from Universidad Carlos III de Madrid, as well as the third place Bell Labs Prize 2014, the Outstanding Service Award 2019 from the SPCE committee of the IEEE Communications Society and the Outstanding Service Award 2020 from the Women in Communications Engineering (WICE) standing committee.

The high bandwidth available at millimeter-wave frequencies allows for very high data rates, and at the same time enables highly accurate localization and environment sensing. This keynote highlights the practical design aspects of localization and sensing systems, and in particular the challenges of joint communication and sensing. We show how to achieve decimeter-level location accuracy with simple commercial millimeter-wave off-the-shelf communication devices and how sub-6 GHz information can help to further improve the reliability of the system. We also discuss how to use communication hardware to perform zero-cost monitoring of human movement and activities in indoor spaces (rather than using dedicated radars). To this end, access points can be retrofitted to perform radar-like extraction of the tiny micro-Doppler effects caused by human motion. We then use this to achieve fine-grained sensing applications such as simultaneous activity recognition and person identification of multiple human subjects. We will focus on the practical implementation aspects, testbed design and experimental results with such systems. 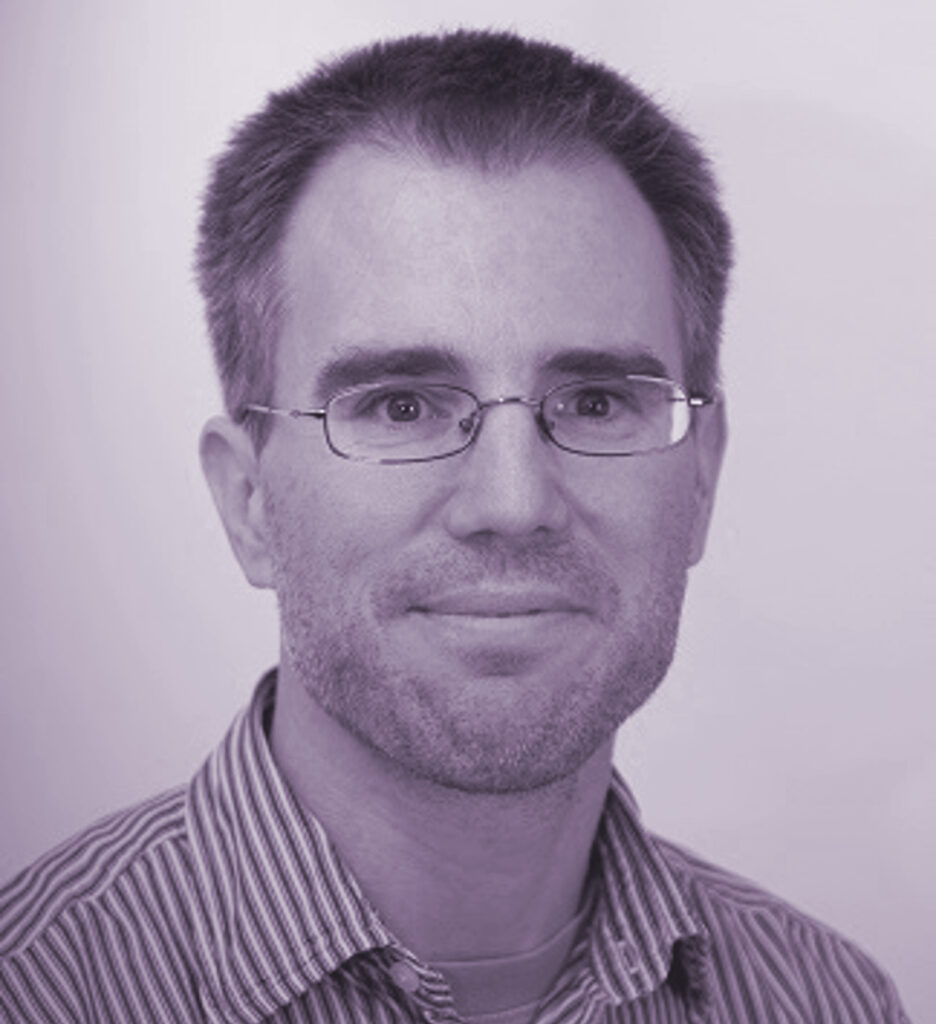 Joerg Widmer is Research Professor and Research Director of IMDEA Networks in Madrid, Spain. Before, he held positions at DOCOMO Euro-Labs in Munich, Germany and EPFL, Switzerland. He was a visiting researcher at the International Computer Science Institute in Berkeley, USA, University College London, UK, and TU Darmstadt, Germany. His research focuses on wireless networks, ranging from extremely high frequency millimeter-wave communication and MAC layer design to mobile network architectures. Joerg Widmer authored more than 200 conference and journal papers and three IETF RFCs, and holds 14 patents. He was awarded an ERC consolidator grant, the Friedrich Wilhelm Bessel Research Award of the Alexander von Humboldt Foundation, a Mercator Fellowship of the German Research Foundation, a Spanish Ramon y Cajal grant, as well as nine best paper awards. He is an IEEE Fellow and Distinguished Member of the ACM.

The so-called verticals were first addressed in 5G. This will continue with 6G and the impact of the use cases they define will continue to increase. Should we just repeat what we did with 5G? One of the findings is that the adoption of new wireless standards by “Verticals” is challenging. Standardization documents are insufficient and inconclusive. With 6G, the complexity of the standard will continue to increase solely because of the additional user groups that need to be addressed. How can we gain confidence in the new technologies, how can we involve the future users? The proposed path to the 6G future is to start as early as possible with the proof of concepts, with real-world trials together with all kinds of stakeholders. The presentation shows a possible way forward and also illustrates the unique position of the one6G association. 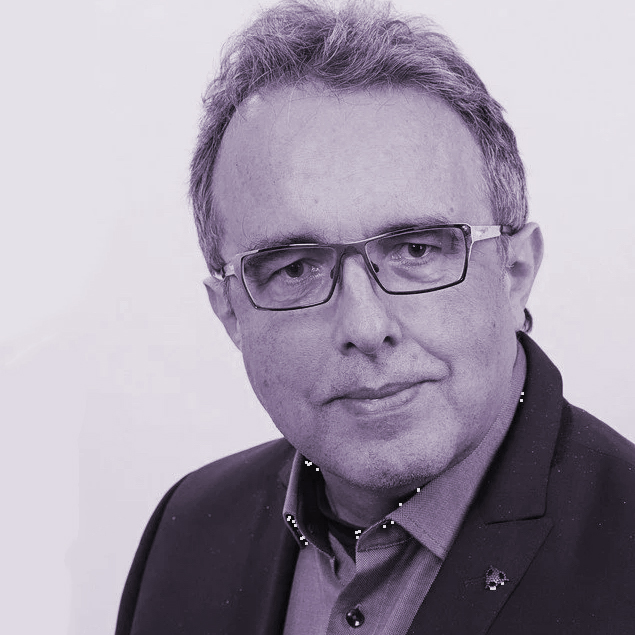 Eichinger Josef joined Huawei Technologies in 2013 to strengthen the 5G Research team in Munich. He started his professional carrier as technical expert in the field of industry energy and electronic systems. After the study he joined Siemens AG 1994 and was working in development of high frequency radar systems, optical networks and as researcher on radio technologies as HSPA and LTE. He changed to Nokia Siemens Networks 2007 as LTE Product Manager and was head of LTE-Advanced FastTrack Programs until 2012. Currently he is leading research on 5G and 6G enabled industrial communication in Huawei Munich Research Center. The focus are 5G/6G for industry 4.0, vehicle-to-vehicle communication and hospitals. Complementary to the research and standardization he is also responsible for the prove of the new concept by trials and live experiments e.g. Industrial Control in the Cloud, Robot as a Service, Tele-operated Driving, etc. Since April 2018 he is also member of the 5G-ACIA steering board and leading the Huawei delegation. Josef is also founding member of one6g.org and chairing the one6G WG4 Evaluation, Testbeds and Pilots because of his the long expierences with prototypes and test systems.

In this talk we will review 5G-LENA system-level simulator, a pluggable module for ns-3 that can be used to simulate 5G NR cellular networks. Its development is open to the community in order to foster early adoption, contributions by industrial and academic partners, collaborative development, and results reproducibility. 5G-LENA has been used to evaluate through system-level simulations the applicability of 5G to various vertical use cases, like mobility (V2X), industry 4.0, metaverse (XR) and cloud gaming. The talk will also address the evolution of the module towards a 6G-LENA simulator, envisioned for the next years. We target in the short term to study IEEE/3GPP coexistence with latest IEEE amendments and 3GPP releases, next-generation radio access networks according to O-RAN architectures and solutions, ML algorithms for drones and vehicular scenarios, XR traffics and QoS management, and the support for TSN in industry 4.0 scenarios, following the latest trends in technology advances for mobile communication networks. 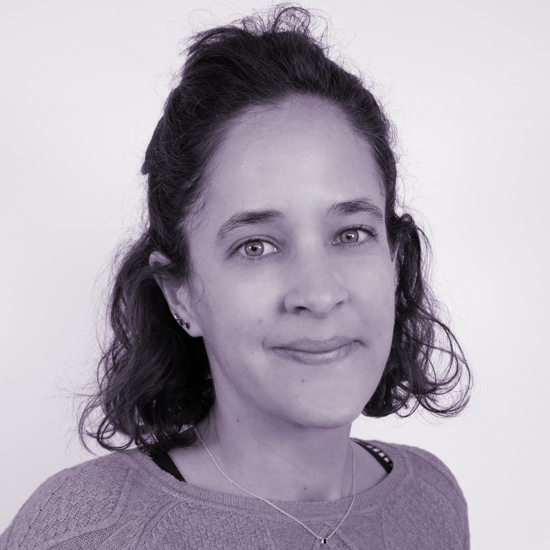 Sandra Lagén is currently a Senior Researcher and Head of the Open Simulations (OpenSim) research unit at Centre Tecnològic de Telecomunicacions de Catalunya (CTTC), Barcelona, Spain. She holds a Telecommunications Engineering degree (2011), Master’s degree (2013), and the Ph.D. degree (2016) from Universitat Politècnica de Catalunya (UPC), Barcelona, Spain. During her PhD, she contributed to 3GPP standardization; being UPC the first university world-wide contributing to 3GPP LTE-A. In CTTC, she has participated in outstanding collaborations with the industry, including InterDigital, NIST (National Institute of Standards and Technology), LLNL (Lawrence Livermore National Lab), Huawei-Sweden, and Meta-Facebook. Also, she has defined the OpenSim research unit strategy and research lines, contributing to the definition of CTTC’s strategic plan, contributed as an expert to the definition of the "Pla d’Impuls 6G" from la Generalitat de Catalunya which determines the guidelines and activities for the development of 6G, participated in various European/national research projects, and supervised MS/PhD students and Google summer of code projects. The major singularity of the OpenSim research unit that she leads is the involvement with ns-3, an open-source end-to-end network simulator, and particularly the design, development, and maintenance of the 5G-LENA module, for simulation of 5G NR networks. Since 2021, she represents CTTC in the executive board/consortium of ns-3. Her PhD thesis has received recognition awards by the Colegio Oficial de Ingenieros de Telecomunicación (COIT) (2017) and the UPC (2019). Also, she is co-author of two best paper awards, by IEEE WCNC (2018) and WNS3 (2020), and she is co-inventor in two non-provisional patent applications granted and three provisional applications.